This collection includes books, articles, documentation, and in a few cases, functioning software related to the hypertext systems of the mid-1980s as described in multiple sources of the time such as the ACM Hypertext ’87 conference proceedings and in J. Conklin’s article Hypertext: An Introduction and Survey. Of course, specific systems of interest include Engelbart’s NLS/Augment and Nelson’s Xanadu (and derivatives) as well as systems like Boxer, CREF, Emacs INFO, IBIS, KMS, Neptune, Xerox NoteCards, PlaneText, Symbolics Document Examiner, SYNVIEW, Textnet, Hyperties, WE, ZOG and other related software (e.g. SemNet, Inspiration and outline processors). 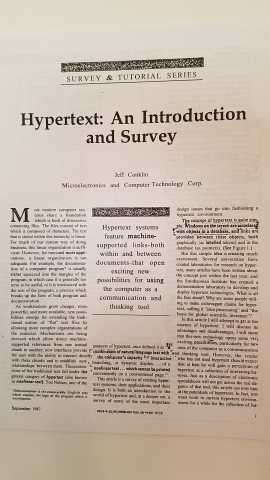 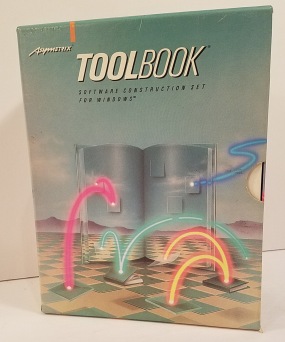 The collection includes over a linear foot of records about the creation, functionality and use of Intermedia. The records include the original tapes and transcriptions of oral histories about the project. 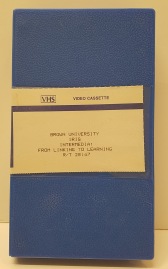 The collection includes over three linear feet of records about the creation, functionality and use of AthenaMuse. The records include the original tapes and transcriptions of oral histories about the project. 1 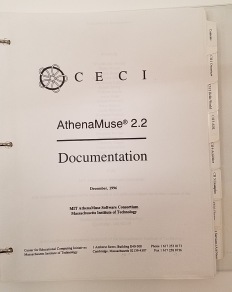 These are some of the most relevant books in the collection. More…

Collection Notes
1 AthenaMuse was a SDK created at MIT by Project Athena’s Visual Computing Group (VCG). It was intended to be the multimedia extensions to X-Windows, but it was never formally propagated through the X-Consortium. However, the software was shared with members of the consortium that contributed to the project (e.g. Sun Microsystems, multiple government agencies etc.). Hopper studied both the functionalities of AthenaMuse and the educational applications that were made with it during her doctoral work that, among other things, included original oral interviews with the team that made the AthenaMuse software and the faculty / scientists / staff that used it to create MIT courseware (primarily the Engineering Geology Tutor and multiple Foreign Language virtual travel applications). Later on, after Hopper became a Visiting Scientist at MIT’s Center for Educational Computing Initiatives (CECI), she edited the final edition of the AthenaMuse 2 software. She reviewed and revised the code for consistency and then corrected the documentation to match. Due to Mary Hopper’s relationship to AthenaMuse’s authors and users, the New Media Museum holds extensive documentation about AtheanMuse 1 & 2 as well as the applications created with the software.